In this interview, we invited Rachel Lee Eun Ju, the founder of Soluna Fine Art, to share the implication and concept of the paintings by the contemporary hyperrealist painter Jeong Myoung-Jo.

Jeong Myoung-Jo was born in Korea and was inspired to pursue art by the beauty of traditional Korean finery (hanbok). She employs an advanced level of painting techniques with devotion to the extreme details in her oeuvre depicting women in hanbok that make you doubt if you are staring at a canvas work by a painter or a photo by a photographer. Even though Jeong always integrates Korean cultural elements into her works, her primary focus is not on the traditional culture but the subject and the objects themselves.

The chiaroscuro technique, similar to Baroque paintings, is implemented in the “The Paradox of Beauty” series to spotlight the notable women from the historical dynasty wearing vibrant colored hanbok and accessories. This dramatization of light and shadows allows audiences to analyze the phycological state and the complicated layers of the beauty of the character in regalia.

Jeong also portrays a contrasting female character, gisaeng (members of the lower class who were trained to become professional artists and performers in the Joseon Dynasty), in the “Play-ground” series. The patterns and poetries on the white backgrounds are associated with male members of the monarchy; for example, Ir-wor-o-bong-do (also known as “Sun and Moon and Five Peaks”, a folding screen placed behind the king’s throne) predominantly represents an emperor. Jeong obscures the shapes and colors of these male-centric iconographies through painterly effects and, as a result,  accentuates the gisaeng with hyperrealistic details.

That said, audiences can undoubtedly get a deeper understanding of Korean history by examining the finery, hairstyle, jewelry, and poetry presented in the paintings. 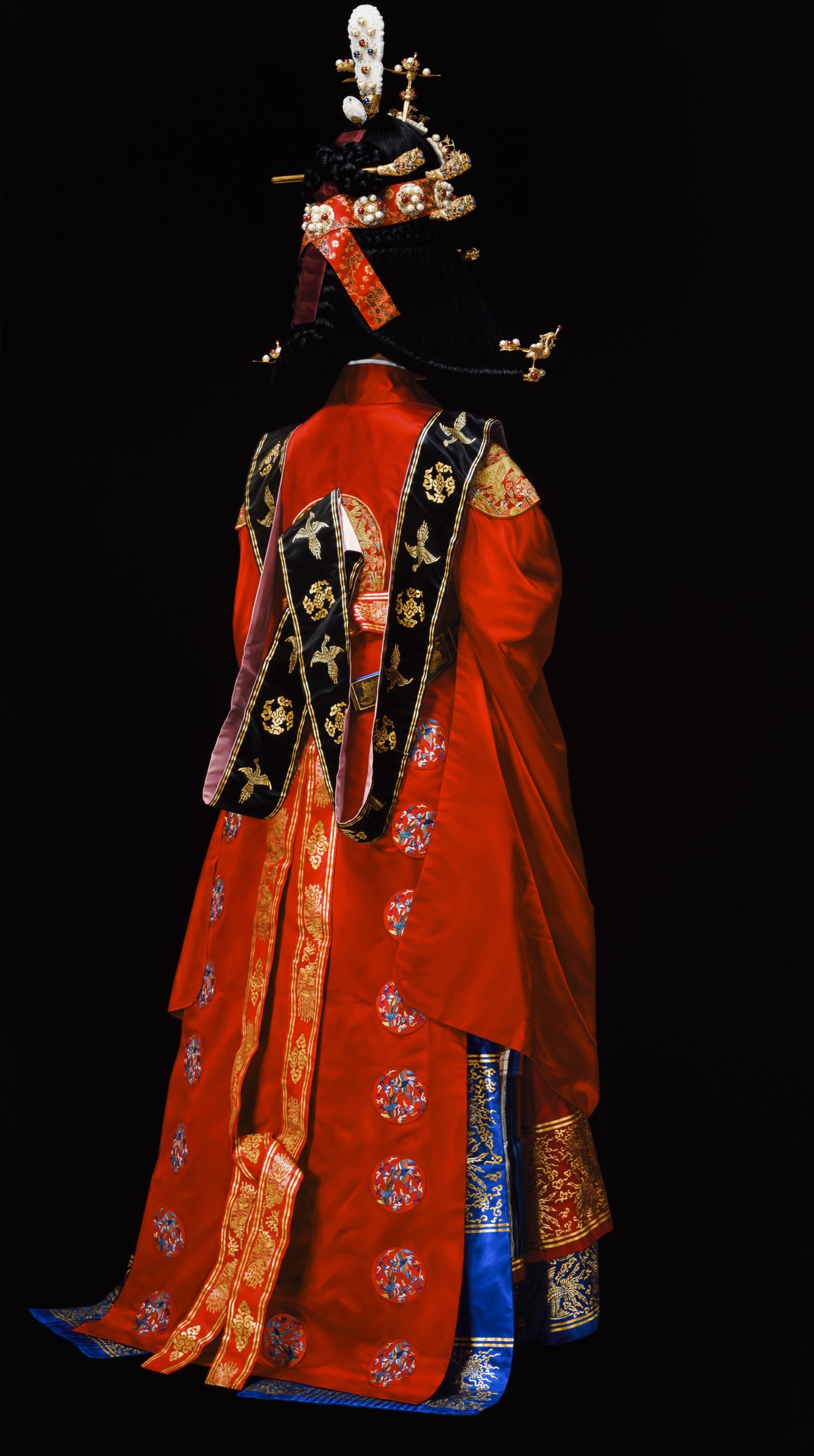 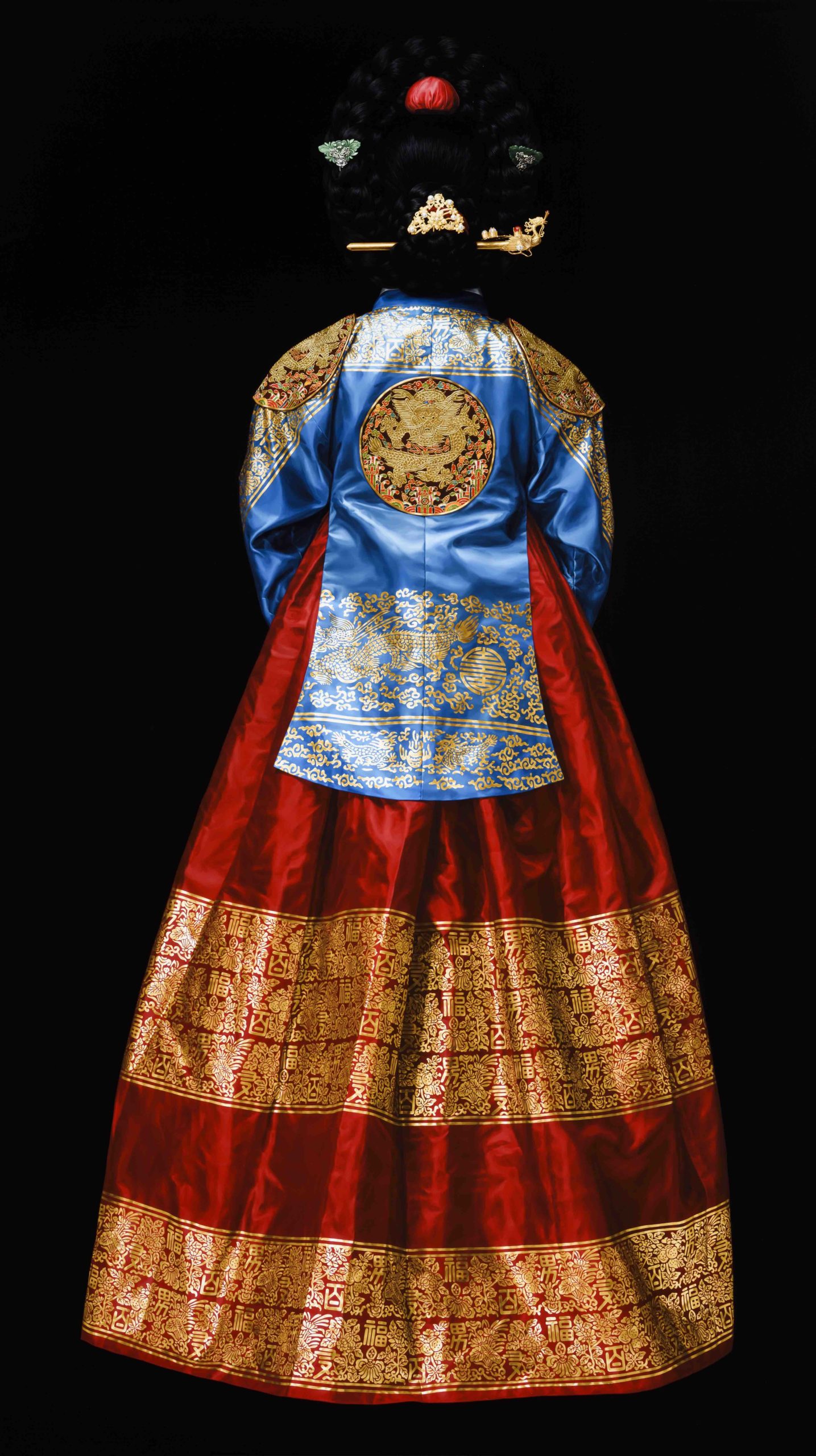 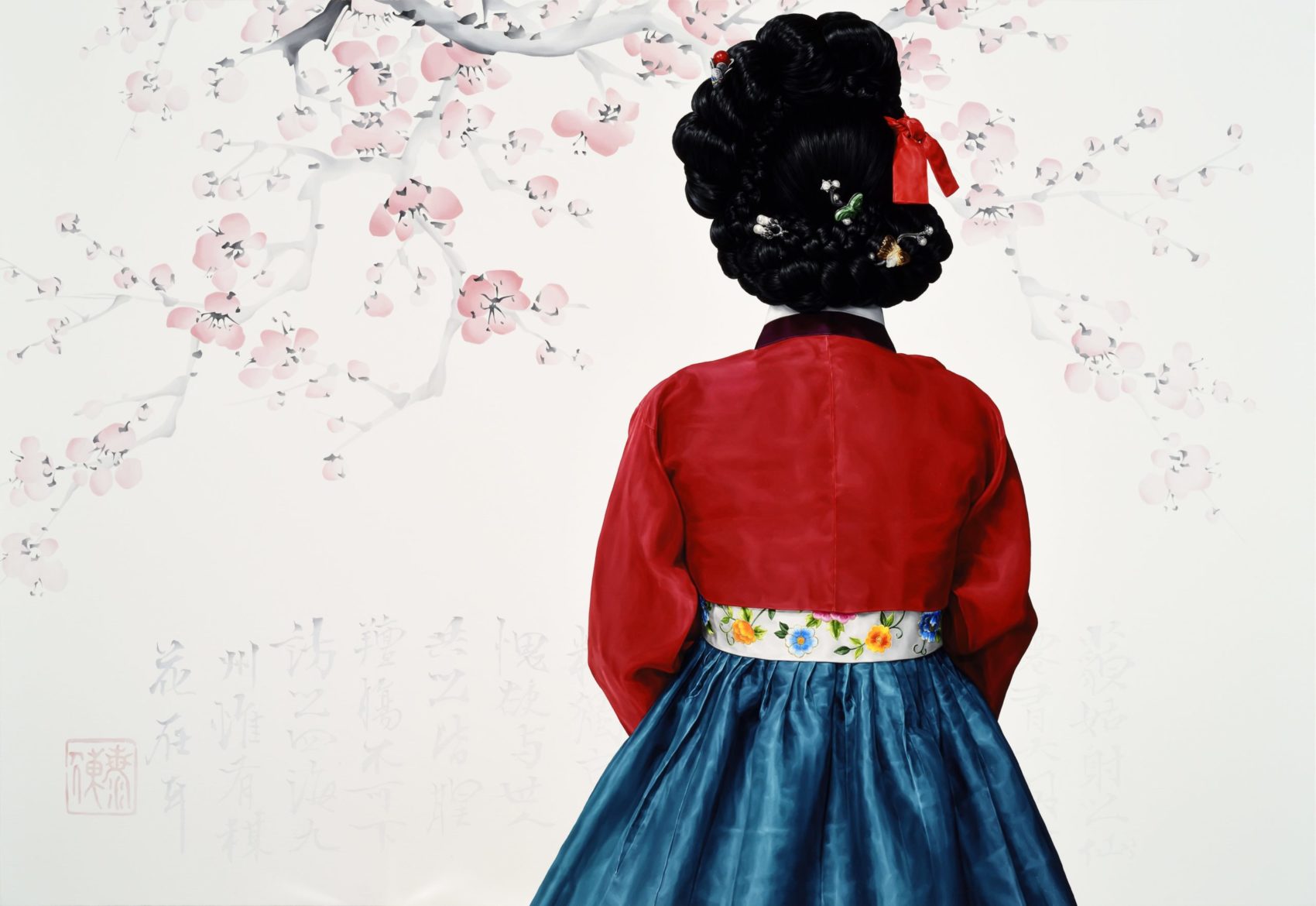 It is the beauty itself that Jeong tries to express through the appearance of women’s backs. She focuses on the essential beauty of women with invisible faces through their splendid clothing, which is generally related to the jobs and positions of the wearers. Along with the hanbok, their hairstyles and ornaments decorating the women also reveal the desires and interests of the anonymous women.

On the other, historical oppressions may be possibly more apparent for the viewers who are more sensitive to the traditional gender and class stereotypes faced by Korean women during the Joseon Dynasty. For example, the queens featured in the “The Paradox of Beauty” are seemingly impeccable in luxurious clothing, but who knows the hidden problems they struggle with under the rigid male-dominated monarchy system? The mixed views above towards beauty illustrate the message that Jeong hopes to deliver. 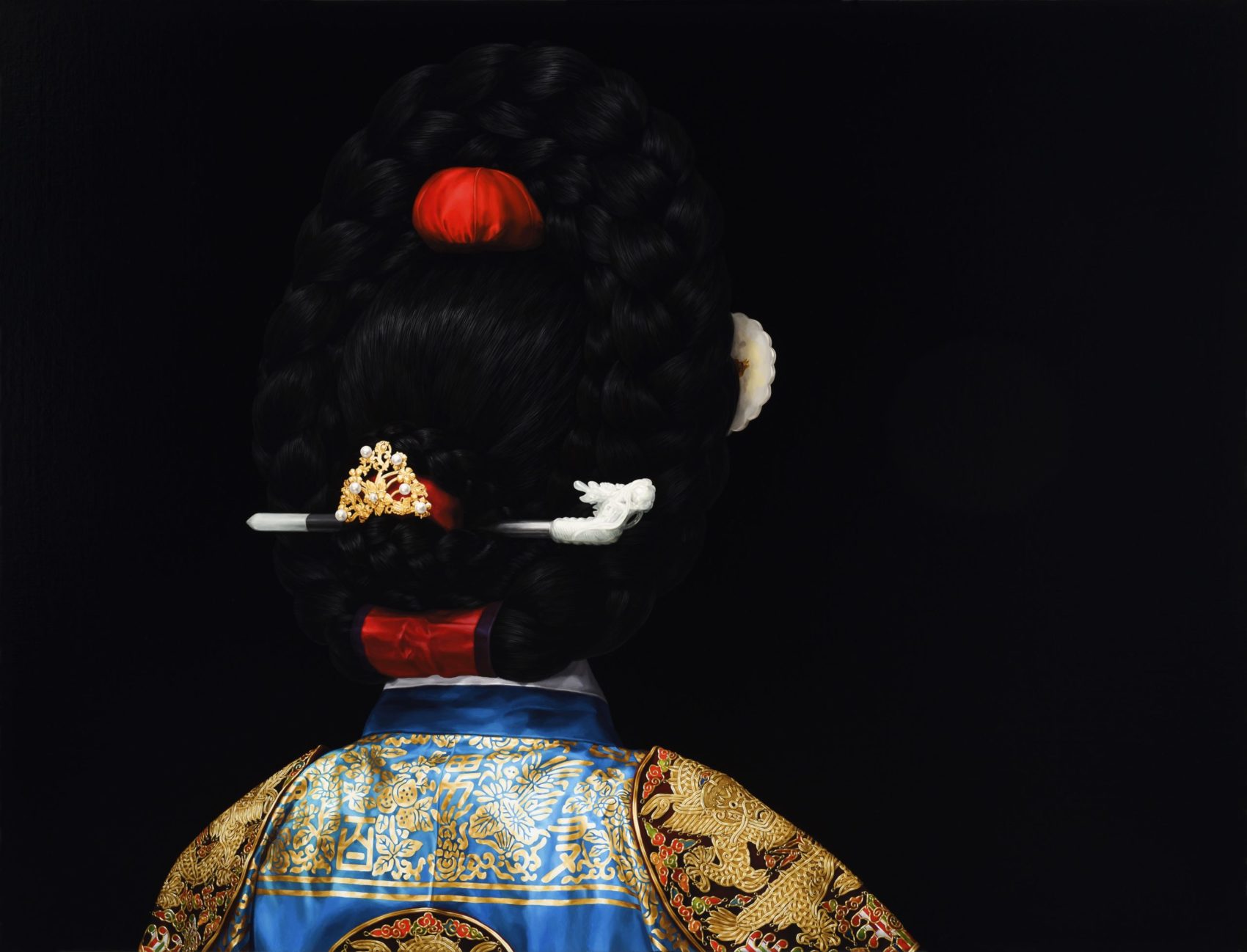 Jeong aims to illuminate the beauty within the subject’s very existence by presenting them without faces. Audiences only have limited external clues like clothing and ornaments to imagine the characters’ emotional state and possible facial expressions. Not only does this challenge our modern perception of beauty which is usually rooted in specific facial features and physique, but it also enables audiences to examine the phycological state of the characters in Jeong’s paintings. Whether the character is sad or happy would be a subjective interpretation. 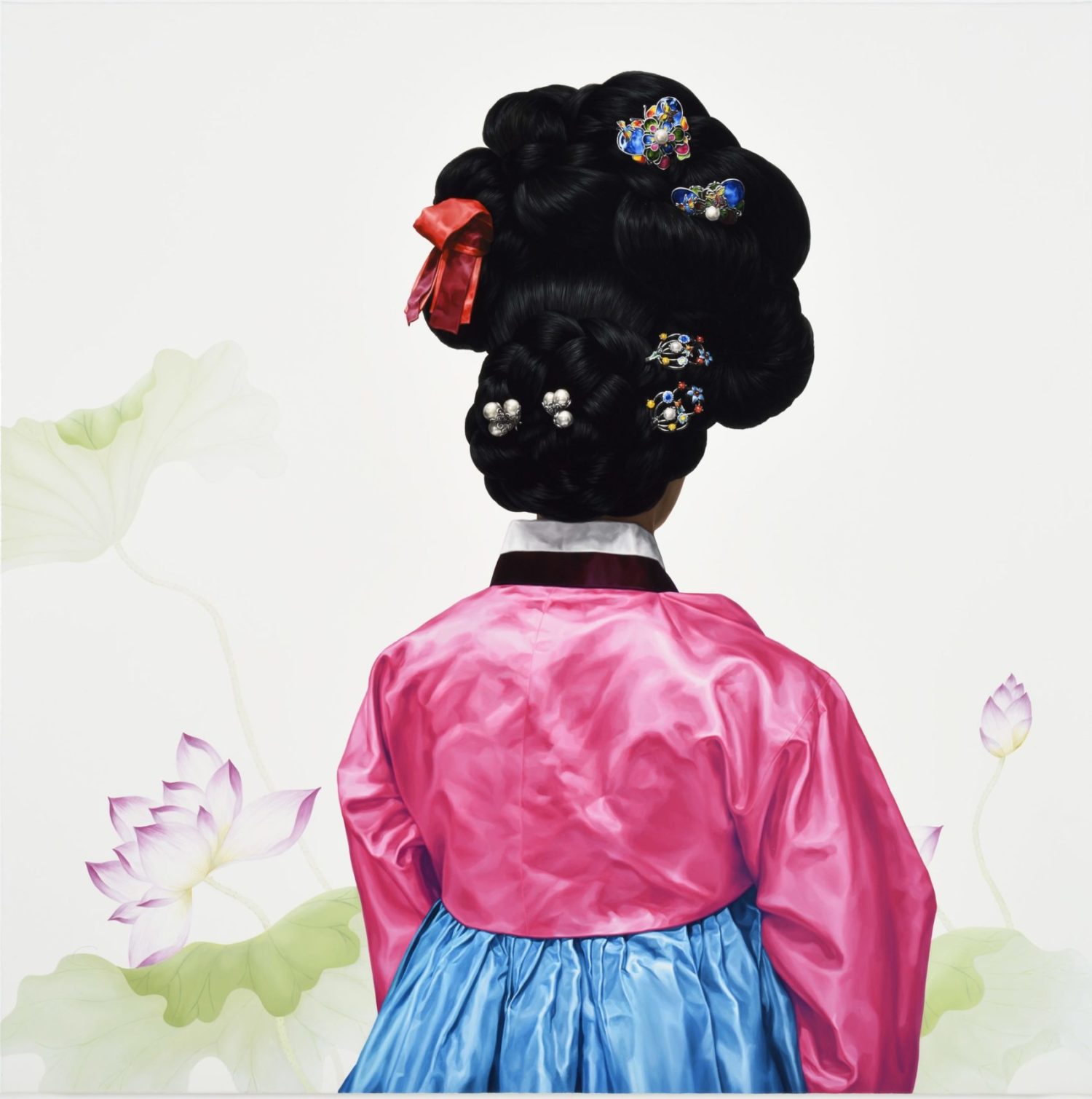 Hyperrealism creates a realistic image that penetrates the fictional realm, which also appears more realistic than reality. Jeong Myoung-Jo chooses to adapt these hyperrealistic techniques into her practice emphasize her open narrative of “The Paradox of Beauty”, bridging the gap between the obvious and unperceived interpretations about the beauty.

The most significant difference between the high-resolution photograph and hyperrealism is that while one purely relies on technology, the other involves the artists’ intensive dedication and labor toward their craft. 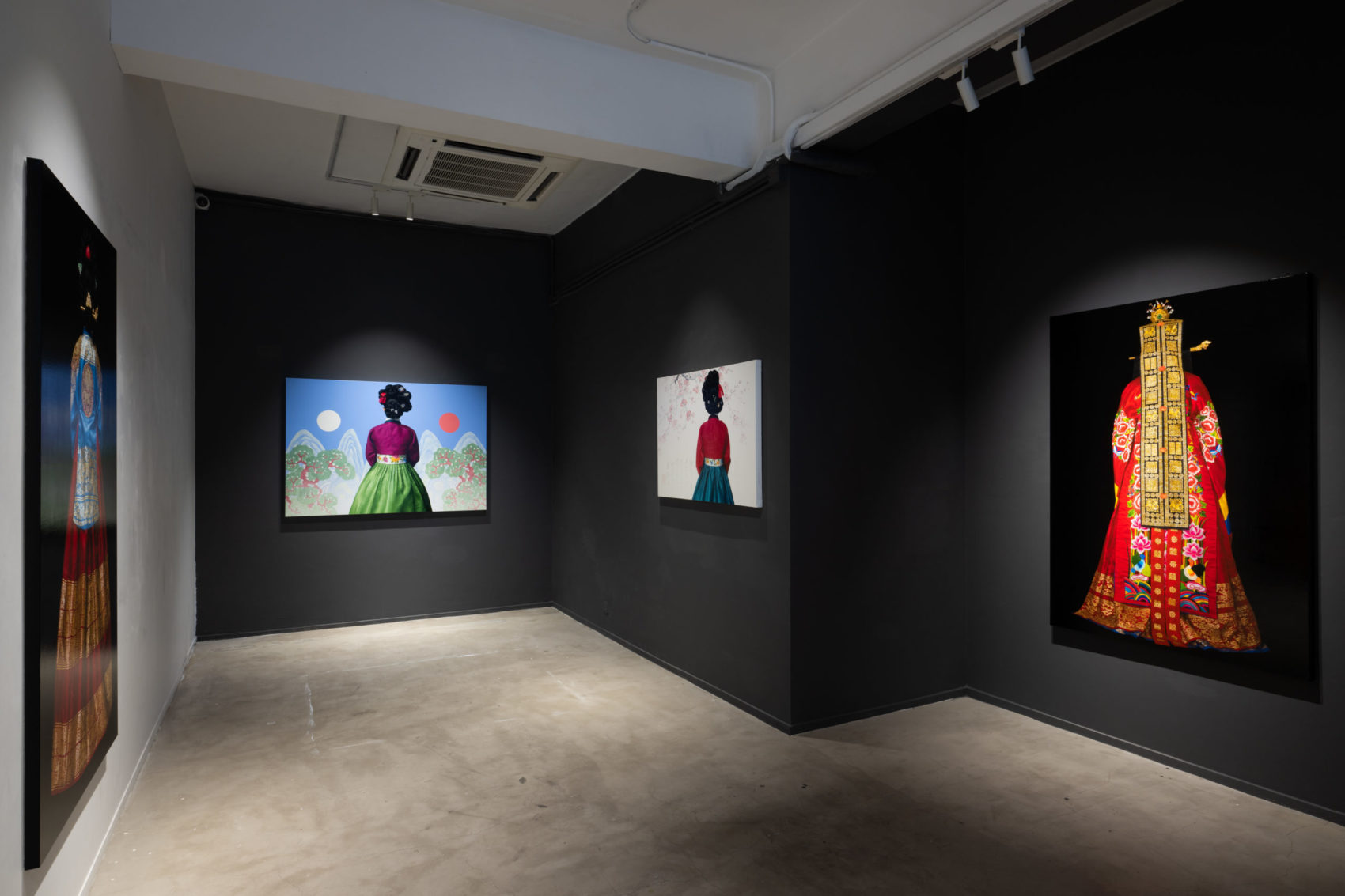 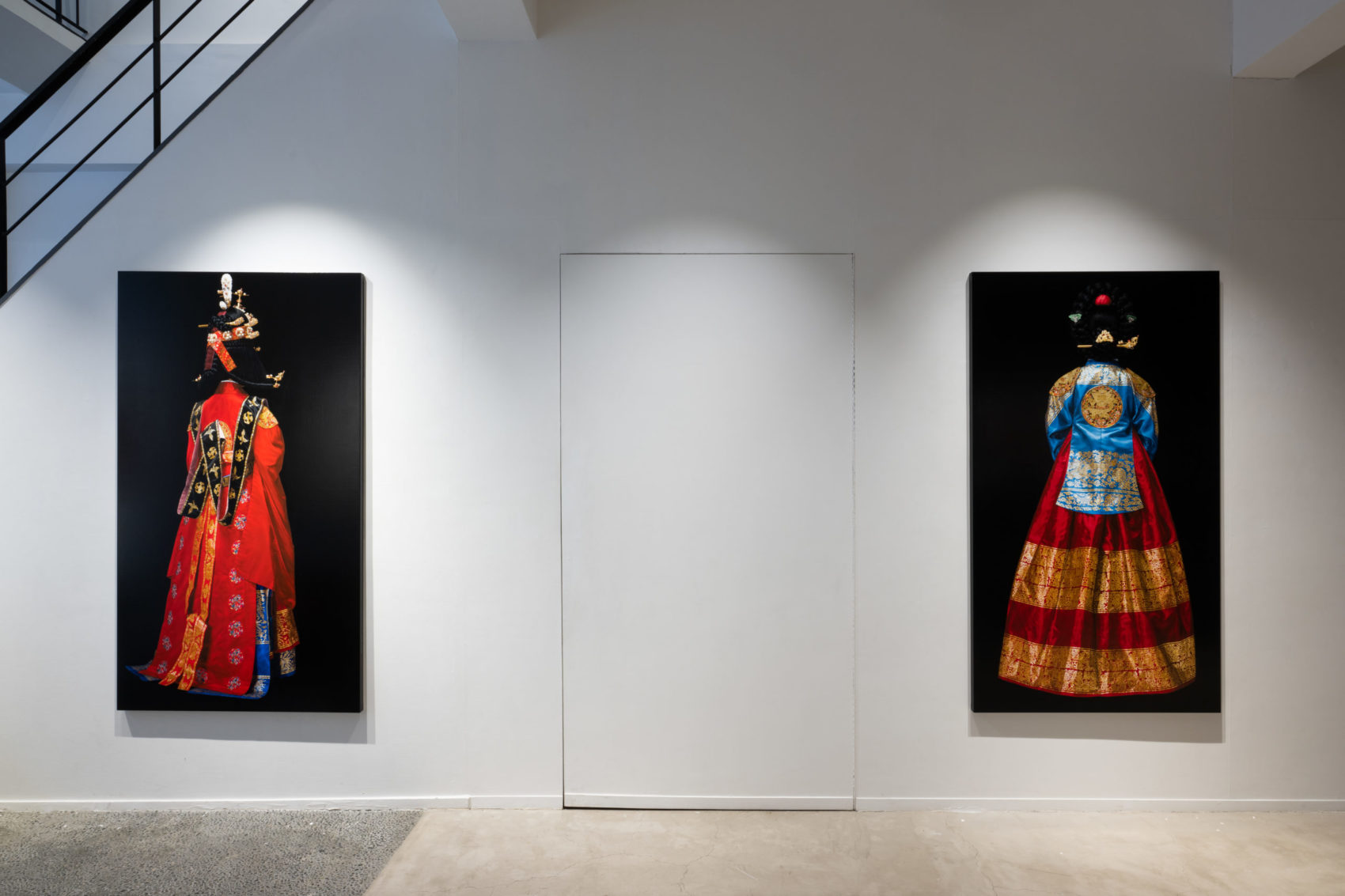 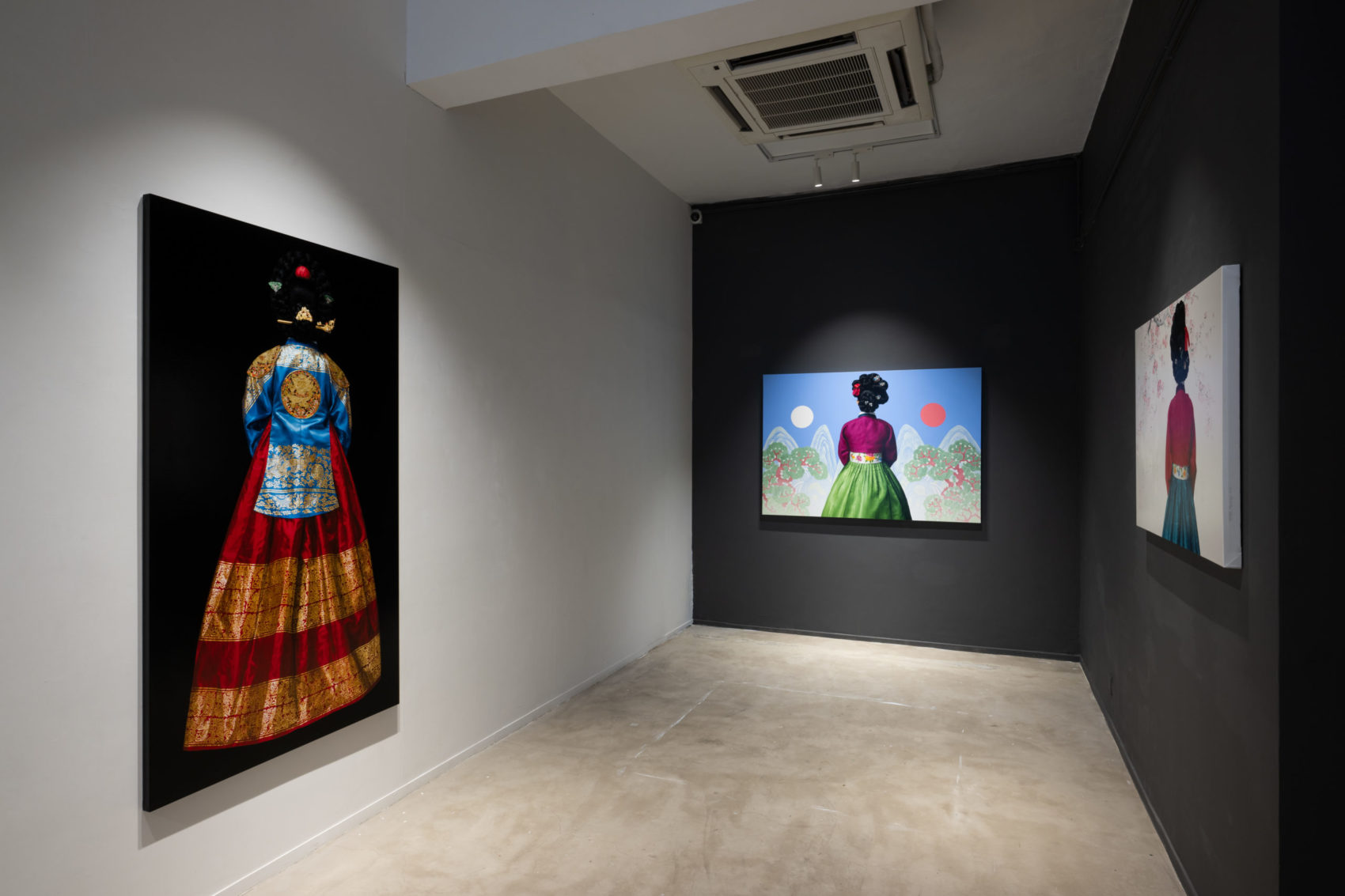 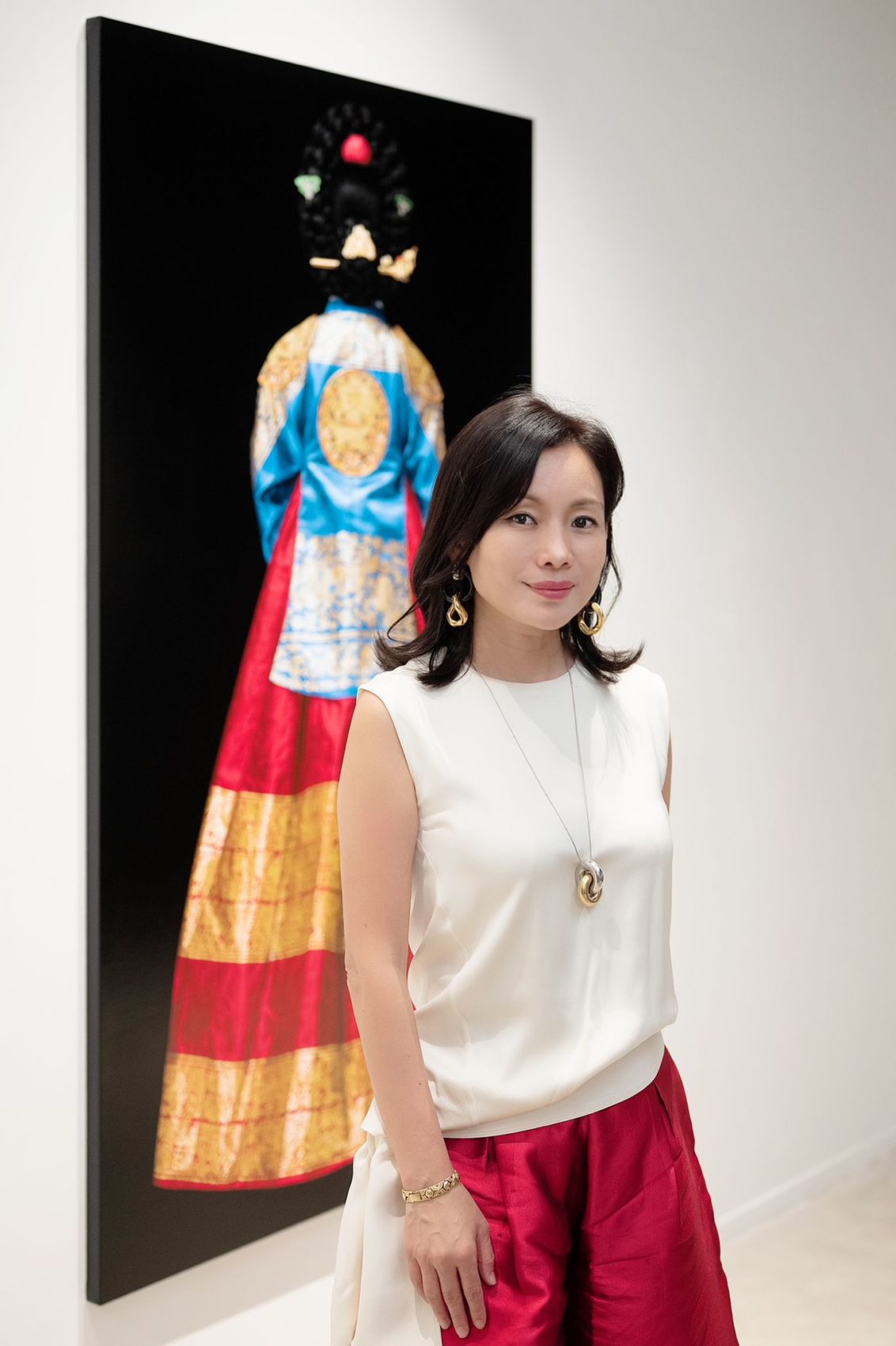 Jeong Myoung-Jo (b. 1970) was born in Korea and was inspired to pursue art by the beauty of Korean traditional clothes. However, Jeong’s work does not merely present colors and patterns. Looking at a woman in a beautiful traditional dress who has her back to the audience, one would find the age-long remorseful lament of traditional Korean women or discover the destiny of the Korean people of having to carry the past wherever they go. Viewers are bound to interpret the painting in the context of society and history, and from the perspective of self-identity. Her works have been exhibited at ARTSIDE Gallery in Korea, Gana Art Center in Korea and Art Central in Hong Kong. Her works are also housed by Hansol Cultural Foundation in Korea, Amorepacific Museum of Art and Standard Chartered in the United Kingdom.